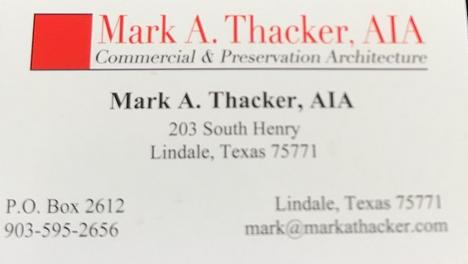 Beginning at an early age Mark Thacker had an interest in archaeology and local history.  Growing up in rural East Texas, his childhood stomping grounds were rich in cultural resources spanning from paleozoic era fossils to the Pine Springs communities' 19th Century homes.

Texas A&M University was the college of choice in 1983.  Mr. Thacker excelled in preservation related courses and graduated in 1986.  Since then countless hours have been spent attending continuing education courses relating to historic structures, as well as, hands on experience; inherent problems, diagnosis and corrective measures.

Mr. Thacker discovered the link between architecture and archaeology over years of working with old buildings.  Even though a building may have been renovated many times over, its' original character lost to history, what was left behind below the ground surface may just be the missing pages that completes a story.  From buried slate fragments an original roof color, composition, and pattern may be replicated.  Broken window glass when analyzed may pinpoint an original construction date or subsequent remodel.  Plaster debris found in cavities sometimes can indicate original wall construction and progression of paint colors.

Whether it is a true preservation project or a renovation project, collecting historical data is critical to achieving an accurate and presentable end result.  Mr. Thacker is uniquely qualified; a knowledge of archaeology, research techniques, extensive experience with a wide variety of old building types, and over 25 years of architectural practice.  All form the foundation of a successful project.

The Texas Archaeological Stewards Network (TASN) is a program of the Texas Historical Commission (THC) that began in 1984.  There are about 110 Stewards statewide with 7 located in the northeast region which extends from the Red River southward to Sabine Pass, encompassing 28 counties.  Stewards are avocational archaeologists who work as volunteers to preserve the vast archaeological landscape of Texas.  For more information visit the THC website at thc.state.tx.us.

Mark Thacker was accepted into the Stewards network in 2014.  Activities have included inspections of previously recorded sites, recording of new sites, and documentation of private artifact collections.  Assistance is provided to private landowners and museums on an as needed basis.  From August 1, 2014 through January 31, 2015, he contributed 239 hours, traveled over 1,000 miles and assisted 21 landowners to help preserve East Texas history.

While most sites consist of Native American cultural resources, historic sites and historic era artifacts are also prevalent.  While a historic building may have been disappeared from the countryside generations ago, there are always cultural remains which can tell a story of construction, use, and even the heritage of previous occupants.  This is an exciting aspect and when combined with preservation architecture, can tell a more complete story of a building's past and how best to restore it.