The East Texas State Fair is almost here: September 25 – October 4, 2015. This is the 100th anniversary of the Fair at the current location. The fair has been held in Tyler for longer than that, being previously held at the Smith County Courthouse square, the Fruit Palace; it’s origin going back at least 140 years. World War II interrupted the fair between 1942 through 1947. A notable historic building west of Harvey Hall is the Mayfair Building.

The art deco Mayfair Building was constructed in 1926 to serve as a multipurpose venue and was referred to as the “Opera House”. It contained a stage on the west end and was furnished with fixed theatre seating. It was remodeled in 1938 to accommodate the Rose Festival coronation ceremony. The stage was relocated to the north side of the auditorium and the floor was redesigned with multi-level seating platforms.

The Mayfair Building has such a rich history, worth as much to preserve as the building itself. Mark Thacker has been working to complete a preservation masterplan for restoration of the facility to continue that history for future generations. 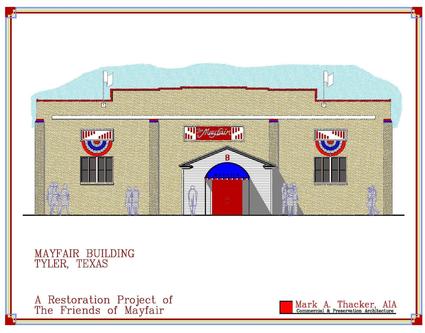