White Oak ISD’s existing football stadium press box had become deteriorated primarily due to water infiltration.  Mark Thacker was hired to evaluate the existing press box and to address accessibility issues.  An investigation was completed which considered conditions of the roof, walls, floor, floor joists and windows.  A summary was prepared indicating the need for total replacement in lieu of renovation.  Replacement costs amounted to approximately $ 50,000.

State law required new facilities and alternations include accessible accommodations based on the Texas Accessibility Standards.  It was recommended the District apply for a variance to exclude a new elevator from the project.  Mr. Thacker prepared the application, attached supporting data and forwarded it to the Texas Department of Licensing and Regulation for review.

The variance request was denied.  Mr. Thacker prepared additional supporting data and filed an appeal.  The appeal was then accepted.  By submitting a variance request based on disproportionate costs, the school district was able to avoid construction of an elevator system and tower costing a minimum of $ 240,000.

With over 600 SF the new press box consists of two radio rooms, two indoor filming rooms, two coaches rooms and a time keeper/announcer/score keeper area.  It also provides a 12” high platform with a counter behind the announcer.  The press box was constructed of all metal materials. 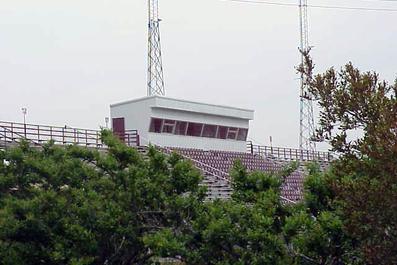