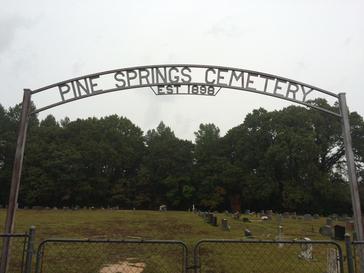 The Pine Springs Community is located outside the City of Tyler in northern Smith County. Settlers began arriving during the 1840’s logging timber and establishing farms. During the early 1880’s a combination Church and school was constructed and in the 1890’s a post office was established with the community being named “Fruit”. Disease spread through the orchards and farms, by 1900 the Post Office had closed, and many families moved away. The community was re-named “Pine Springs” due to the abundance of pine trees and ample spring water and did rebound. Early settlers typically interred departed family members in small plots on their own property. In 1898 the Church established a cemetery.

Some folks have reported seeing various strange occurrences within the chain link fencing as far back as I can remember. This includes me. Driving home one night I saw a red light on the hill among the stone monuments, just a brief glimpse, then it was gone. I later recounted what I had seen to several friends.

A few nights later a buddy called and said he saw the red light, as suddenly as it appeared, it had disappeared. Living only a short distance away, I grabbed the two essentials; gun and ammo. The thought of a flashlight never crossed my mind. I arrived at the dark cemetery and parked at the south gate with the truck lights shining up the incline, jumped out and proceeded at a quick pace.

There was that mysterious red light a few hundred yards up front! As I walked onward a dark image appeared to the right, I stopped, then it was gone. Walked a little further, to the right - image out of corner of eyes, stopped – image gone. At about the third stop Mark was about to scrap the whole idea and blaze a new trail to the house.

This is another one of those paranormal events that can be explained. The red light – a red glass container with a lit wick floating in kerosene. The dark image – my shadow cast on headstones as I was walking; when I stopped the shadow had nothing to reflect from. Even though I feel like a fool on this one, I still believe there are spookies present and now the essentials to carry include gun, ammo and flashlight.