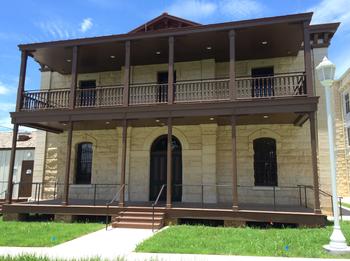 The Robertson County Jail was designed by Fredrick Ruffini in 1879.  It is a two story

T-shaped plan based on the Second French Empire style.  The jail was continuously used until 1988 when a new facility was built.

The historic jail contained some innovative technological features by late 19th Century standards.  It had a two story open cell room.  Two level modular cells were relocated from the former County Jail located in Calvert (now a bed and breakfast called the 1875 Hammond House), the second level had a steel catwalk surrounding the cells.  An octagon shaped chimney was used as a ventilation shaft.

The building employed a running water system beginning at the roof.  Rainwater was collected in a perimeter gutter, transferred to the ground via a number of downspouts, and discharged into an underground eight foot diameter cistern.  The abandoned cistern was uncovered during utility work, it was constructed of a brick basin parged with plaster.  A hand pump would move water up into the attic, into a sheet metal lined wooden holding tank or trough (it was rectangular and open at the top).  The water could then gravity flow downward throughout the building.  A sewer system was also present.

The jailer had a room upstairs where he could monitor the cell area.  Copper tubes were embedded in the limestone walls for listening purposes.  Cone shaped view ports appear on original drawings but may have been removed at some point.  A steel door referred to as a basket door is located on the first floor, it contained a small steel bar cage in which the jailer could extend his head into the cell room without being conked on the head.

During the 1890’s a two story wood porch was added to the main entry and the cell room was remodeled.  The building had evidence of at least two early fires, fortunately they only resulted in limited damage.  A significant renovation took place in the early 1920’s, the wood porch was replaced with concrete, a concrete slab was added to the cell room and the interior was remodeled.  During demolition 1870’s era bar panels and window bar spires were found in old concrete slabs.  Mark provided restoration services to remove the 1920’s construction and convert the former jail to adult and juvenile probation.  The two entities required a separation and each a dedicated entry. The jail is listed on the National Register of Historic Places, is a Recorded Texas Historical Landmark (RTHL) and is a State Antiquities Landmark (SAL). 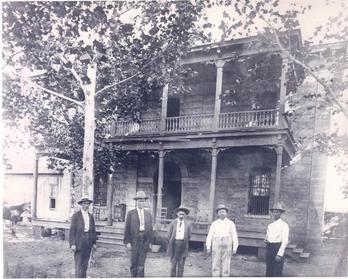