Palestine, Texas was a booming town during the early 1900’s due to a number of factors; industry, railroads, agriculture, location… Citizens invested in their children’s education by supporting aggressive funding for new facilities across the City. Apparently the City had its’ fair share of skilled architects and builders who produced exquisite architectural examples that has lasted over a hundred years. One such example is the former Alamo Elementary School.

The building is located in the Northside Historic District, one of four in the City listed on the National Register. The building was constructed in 1911 or 1912 in the heart of a residential neighborhood. It appears to be an informal version of the Greek Revival style with limited Tudor Revival elements. It served as an elementary school until the 1970’s. During the early 1980’s a new public library was constructed around three sides and the old building lost much of it’s historic fabric. The library was removed several years ago and the building has sustained neglect and vandalism.

The old building now has a bright future, having been purchased by a private business and restoration of the exterior is underway as well as the interior renovations for offices.  The project began evolved from a preservation master plan completed by Mark Thacker bringing the building back to life. 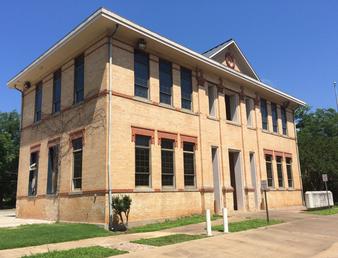