Began as someone’s dream. Took about 8 months to build by true craftsmen using hand tools and brute strength, they took pride in their work back then. Cost a lot of money in those days, recession of the 1890’s. Stood for over 100 years hearing children’s voices, birthday parties, family Christmas and Thanksgiving gatherings. Weathered countless snowstorms, windstorms, hail, summer heat and avoided the common destruction by fire.

It witnessed World Wars I and II firsthand; young people leaving the City and returning as mature veterans. A black and white TV in the parlor may have shown the first step on the moon. It saw some of it’s neighbors disappear, some built while Tyler was still young. It does have a history but that history will now only reside in archives, old forgotten photo albums, or briefly in our memories. It took a couple of laborers and an excavator less than a day to convert the stately old home to a pile of debris. 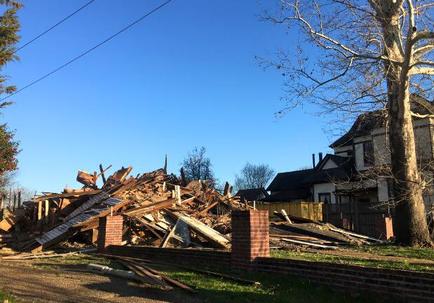