Not all of our projects are above ground. Mark has been assisting a local cemetery with efforts to locate unmarked graves.

An area consisting of about an acre contained only several markers. It was suspected there were a number of gravesites present but the markers may have been removed in the 1930’s. The area was surveyed and revealed approximately 180 grave shafts. In some cases there was a small shaft at the foot of a larger shaft. Ground penetrating radar (GPR) is being used in the photograph to detect anomalies occurring below the ground surface. The undisturbed soil will appear as consistent stratus, soil that has been disturbed or mixed, will appear somewhat different.

We will most likely never know their names, family, or anything else about their time here on earth. That is unfortunate. Hopefully, at least some type of permanent marker can be placed to acknowledge their presence. 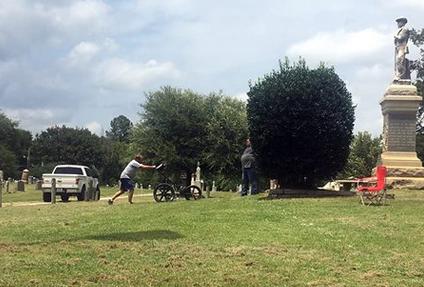