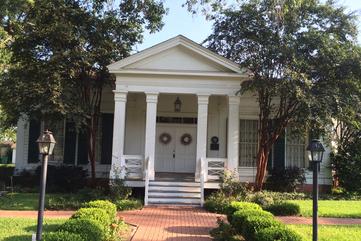 The Bradley House, sometimes called the Moody – Bradley House, located in Fairfield has an interesting history. The Greek Revival dwelling was originally constructed in 1860 by W.L. Moody who later relocated to Galveston and became a multi-millionaire, numerous buildings continue to bear the Moody name. Moody built the single story house for his bride, Phereby Elizabeth Bradley. Their son W.L. Moody Jr. was born in the house and later became one of the ten wealthiest men in the United States.

The Moody’s moved to Galveston around 1866, then sold the house to Phereby’s father Francis Bradley for $2,800.00 in gold. Mr. Bradley died in the house in 1876, his third wife continued to occupy the residence until she abruptly left. According to local accounts "She left the house as if she were coming back the next day.  A dress was
flung on a chair and a bonnet hung on a bedpost as if she'd left in haste". "There were groceries in the kitchen, sugar in the sugar bowls.  An apron hung from a hook.  Only she didn't return." Some folks say it’s haunted.

Beginning about 1939, the house had another owner, later it was purchased by the Fairfield History Club. It is a Recorded Texas Historic Landmark and is currently used as a museum and as a public event venue. The house has had a number of moisture issues over the years. Mark Thacker prepared a preservation plan that addressed french drain systems, crawl space fans, site grading, foundation repair/leveling, gutters, downspouts, and the impact of tree roots on piers.