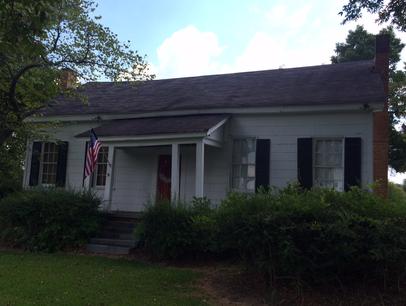 As a flood of settlers made their way into East Texas during the 1830’s and 40’s they found an abundance of old growth timber available for constructing homes and barns. Railroads had not extended to the area, the primary means of transporting significant building materials was via river transportation. Long leaf pine and oak timber several hundred years old were tall and straight. With a little ax and cross-cut saw work a small one room (sometimes called a pen) shelter could be constructed, usually with a brick or stone chimney on one end. Later another “pen” would be added with a center passage between the two. This created the dog trot.

It was common for the center passage to be enclosed front and rear, converting it into a central hall. The dog trot design was not exclusive to log construction, during the 1850’s and 60’s, with the establishment of small movable sawmills rough cut lumber and later dressed lumber was used, and more formal dwellings began to show up.

This is a great 1860’s example located near Alto on the “Kings Highway”. The original dogtrot remains, however it has been enclosed and several additions have been made over the last 150 years. Mark has been documenting the house this week and will begin restoration plans soon.