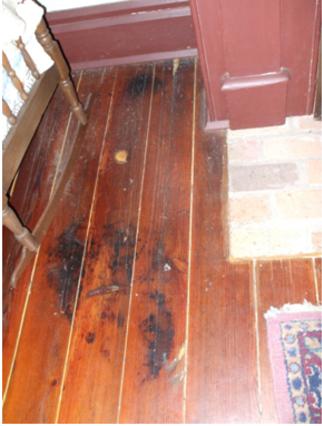 The Howard-Dickinson house located in Henderson is no stranger to ghost stories, it is a main attraction of the October ghost tours. The Greek Revival house was constructed around 1855 by the Howard brothers and may be the first brick house built in the town. The Howard family occupied the house for about 50 years.

Among several ghost stories is the one from 1896 of Pat and George Howard. Lore has it the two brothers were in the basement cleaning a gun, Pat discharged a round into George. George managed to crawl upstairs and died by his mother’s bed. There are distinct staining of the long leaf pine flooring boards in this area, it appears an unsuccessful effort was made to sand the stain out. It has been reported the grieving mother still inhabits the bedroom. There have been other occurrences; pictures falling from walls, a woman in white ascending the stairway, moving silverware…enough that “paranormal professionals” have conducted investigations.

Well, Mark Thacker has had his experience in this house. As a preservation architect he finds himself spending countless hours alone in these old quiet buildings. Numerous photos are quickly taken during the documentation process and later reviewed in the office. In this case; next day - one photo jumped through the computer screen, a woman’s face with a piercing glare from a dining room painting. A return to the house later revealed only an oil painting of a fruit basket, no woman’s face. This photo is included, you decide. No, it is not a reflection! 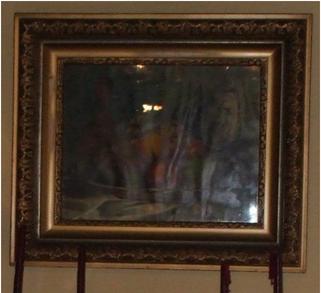