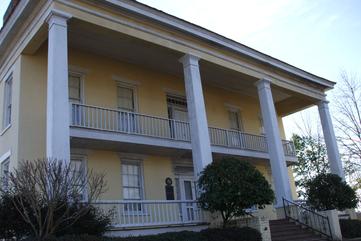 The Howard-Dickinson House is an example of Greek Revival architecture with a full-façade porch. The original brick masonry structure was completed around 1855 and a wood framed addition was made in 1905. It is reported as being the first brick home constructed in Rusk County, built by two brothers who went on to construct many buildings in downtown Henderson during the late 20th century. The house contains a partial basement which is somewhat unique to East Texas.

The first president of the Republic of Texas, Sam Houston, was a cousin to Martha Ann Howard and was an occasional visitor to the house. The Howard family occupied the house about fifty years and the next 50 years the Dickinson family, hence the name Howard-Dickinson House. At the beginning of the oil boom of East Texas during the 1930’s the addition was converted to a boarding house.

Mark completed a historic preservation master plan for the notable house that now serves as a local museum and event venue. It is said the house is haunted, look for Mark’s own ghost experience to be posted on Facebook in October. The property is owned and managed by the Rusk County Heritage Association. The house contains a State Historical Committee Survey Official Historical Medallion and is located at 501 South Main Street near downtown Henderson.